Today it is exactly one week after the AIDS Awareness Event, which our centre organized. And it is probably my deadline to write this post and to share the information about it 🙂

But firstly, let me tell more about how it was. The AIDS Awareness Day took place in Divadlo z Pasáže. It was really great that they let us hold the event in their building, so I would like to thank them again about that. In addition to this, they kindly offered hot tea to the participants 🙂

In order to make the program richer and more beneficial for participants, we also invited two very important persons. The first person is a doctor, MUDr. Mária Vachalíková, an infectologist with many years of experience working with HIV-positive patients. She shared really interesting facts about HIV and AIDS and also about the life of people living with AIDS. In the end of the event, she actively took part in the discussion, which in my opinion was very interesting and beneficial. The other person who gave a big contribution to this event is the interpreter, Mr. Kubinec from Prekladateľskej a tlmočníckej spoločnosti FHV UMB. He had the really hard task to translate everything – all the information from the presentation, the videos and also all the discussion inputs, from Slovak into English and vice versa. That is how the event was completely comprehensible to all participants, even if they did not speak Slovak or English.

Of course, last but not at least, I really would like to thank the people who came to the event, even if the weather was not that great and even if the topic was maybe not the most interesting one for the young people in the city. Each of you gave a really great contribution to the success of the whole event.

The program we prepared had two main aims – first, to give information and second, to put an accent on the most emotional aspects of the topic, because it is a problem which is not just in the statistics on the web-site of WHO or the local Ministry of Health, it is something that could happen to anybody. For that reason, we also put emphasis on the stories of several people living with AIDS. (All the materials used for the program are available at the end of this post).

And speaking about emotions, maybe I should also share my personal ones concerning this event. Actually, if I have to be honest, I really have very mixed feelings about that. Firstly, I felt very responsible about this event, because of the information I had to gather and to present to the audience. I have participated in many AIDS Awareness events back home, but for most of them I was just helping, so I was not the one in charge about the content of the information presented. But for this event I had this responsibility, which at the beginning made me a little bit nervous, but the more I was researching in the info-courses, the more I was inspired and curious. (I had an idea, how big the problem is, but then I actually realized that all I knew was just a very little part of the tip of the iceberg) So the preparation of this event really gave me a lot.

On the exact day of the event, I was so happy of all the things that Andy, our coordinator, had managed to organize, that I was definitely sure that it would be a very successful activity… And then came the big disappointment of the number of people who appeared… I was really surprised, because when I was talking about the approaching event, there were so many people, who showed their interest, so I was pretty convinced that we would have a big audience. But then we had the big snow, which probably made most of them stay at home or maybe the people realized that their knowledge about the topic was rich enough not to participate in such kind of meeting. 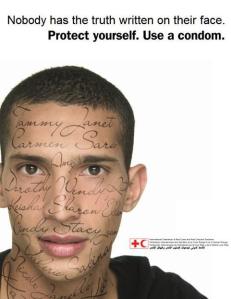 I don’t know. And it probably doesn’t matter anymore. Because during the event I saw real interest in the ones, who came and the discussion we had in the end was really amazing – it lasted one hour and 10 minutes more than planned. For me it was really great. So, if at the beginning of the event I was about to fall into tears because I was hugely disappointed, in the end of the event I really felt very happy about the success of the activity. So, in the end, I revised another important lesson – most of the times things are not the way they look.

Thank you for reading this long post. If you are interested in the content of the activity, in the links below you can find some available materials we prepared for the AIDS Awareness day.

“SPREAD THE INFO. SAVE A LIFE”

The World AIDS Day is slowly but surely approaching and the preparation of our AIDS awareness event is on a full swing. Since our aim is to be as much informative and useful as possible, we have prepared something special for the meeting J

Also, for those who are interested, here is the provisional program of the event. The sub-topics we would like to cover are as follows:

Have a wonderful day and hope to see all of you on Tuesday, 4th of December at 18:00 in the building of Divadlo z pasáže (Lazovná street 21, Banská Bystrica) 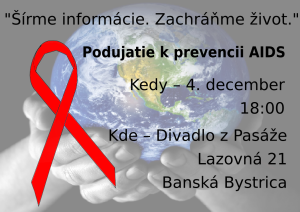 The 1st of December is the World Day against HIV/AIDS, an opportunity to raise awareness about the status of the pandemic and encourage progress in HIV/AIDS prevention. People and communities around the world dedicate the day to activities and events to cherish the memories of those who battled with the disease, to celebrate progress achieved in the global response to HIV and to promote prevention.

Since we attach a lot of importance to the topic, we are preparing a special event for this occasion. To have some more information stay in touch!